About a week ago I finished my first major organized bike ride – the Seattle to Portland Bicycle Classic – or STP. 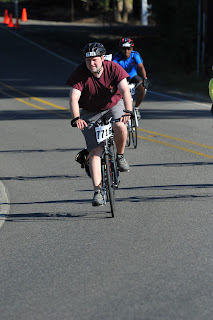 I figured it was a great chance to acid-test my 3d printed friction shifter (which to cut to the chase – worked great the entire time). 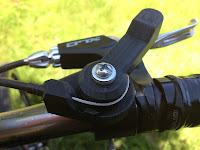 I hate getting up early for stuff – and I’m not a big fan of crowds. So – I figured I’d bypass the official start-line – and join up with other riders a few miles south around 7:30 (when the start line closes).

I also don’t like people messing with my stuff – so I opted to avoid using the luggage-trucks – and packed all my gear on my bike. This included my tent, sleeping bag, sleeping pad, half-gallon of gatorade, bike tools and a bunch of other crap. 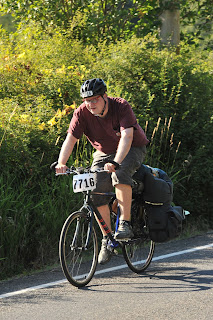 I hate spandex so I just wore the cargo shorts I usually do.

All of this came back to haunt me a bit…

I’m not sure exactly how much the loaded bike slowed me down – but it was a lot more than I expected.

Being slow caused me to fall towards the back of the surprisingly-sparse pack of late-starters – leaving me without people to draft off of – making me slower still.

I eventually got far enough behind where the event-provided rest/food stops were packing up by the time I arrived. This left me without proper nutrition besides some powerbars and chewy-sugary-things (thanks Beth).

I had a few aches / pains from specific body parts by mile 50 or so – but these mostly went away after I made a few adjustments to my bike. While I think I was staying well-hydrated – this ride was leaving me much more depleted than the unloaded 60-ish mile rides I commonly do. 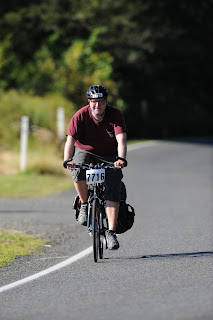 As it got past 6pm – I saw fewer and fewer people on the route. It was honestly getting a bit spooky. I came across a cyclist with a flat (who I stopped to help) – making me a bit later still.

I finally made Centralia about 6:45pm. I may not have literally been the last one to roll-in – but it certainly felt like it.

I setup camp – then scarfed down 1.5 hamburgers and some beer mixed with lemonade.

While exhausted – I actually felt decent for having just biked 100+ miles in one-day with a full load of camping gear. I had some aches – but nothing serious.

The shifter worked perfectly for the first 100 miles.

What concerned me was that my bus from Portland back to Seattle left at 7pm the next day. If I repeated Day 1’s performance – I might be stuck in Portland without a hotel room.

I was planning on getting up around 5am – but the noise of other people packing up camp started around 4am.

After I packed up – I tossed most of my stuff on the luggage truck. I was not repeating that mistake.

I took advantage of the pancake breakfast being offered – having another real meal felt good.

I hit the road about 5:15am and shortly after realized riding 100 miles the prior day in cargo shorts had taken its toll. I dropped into a gas station and purchased some duct tape. The field repairs were generally successful.

It was amazing how much faster I went without all my camping gear. I was keeping up with pack – and hence able to draft and save energy. I was able to cover large distances quickly in a way I haven’t been able to when cycling alone.

I also greatly appreciated having the rest stops actually be open / serving small amounts of food (PBJ – yum!). Much more fun than the first day.

The later part of the ride also transitions from scenic country roads towards more monotonous riding along side the highway.

The last few-dozen miles went like molasses. It turns out the finish line isn’t at the edge of Portland – but rather after about 8 miles of traffic-light filled biking inside Portland. I can’t explain how ripped off I felt when I realized that “Portland 15 miles” really means 23-miles to the finish line. There are few things more frustrating than biking 200+ miles to then be stuck in traffic – just a few miles from your destination.

I finally rolled across the finish line around 5:15pm. Surprisingly my total time for Day 2 was pretty similar to Day 1’s – but I spent a lot more time stopped at rest areas.

I felt pretty good when I finished – although a bit dizzy and totally spent. It took about 1.5 days to fully recover post-event. It was far more exercise than I’ve ever gotten in such a relatively short period. 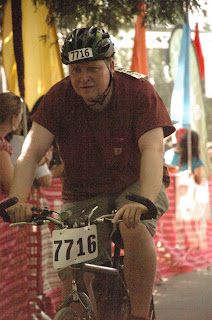 The shifter worked great – it didn’t need any adjustments for the entire ride. So far I’ve put about 400 miles on the latest version – with no signs of major wear.

Lessons for other STP Participants:
– If you’re slow – start as early as possible
– Pack light – use the luggage trucks
– Proper bike attire is probably a good idea
– Have some experimental bike hardware you want to try out? Give it a go – it’ll probably work fine!

And Now – A Brief Diatribe on Bike Gearing

Out of my various challenges on the ride – I was able to make it up the worst hill (Puyallup) with all my camping gear and only “spun-out” from lack of higher gearing a few times. Further – you can actually get up to about 310% range with an 8-speed cassette – still using a single front chainring / no front-derailer.

In short – I think a large part of bikes having front-derailers is about marketing – so they can claim “27-speeds” – even though 1/3rd of those gears aren’t usable and most people don’t need them. Yes – I’m aware of the efficiency loss from having a less-straight chainline – but it seems like a minor price to pay for the reduction in mechanical complexity and user interface.